Skip to content
So another Sunday twitter walk and the weather was not looking great, after a few messages it was decided we would still go ahead with the walk and maybe do a lower level walk if weather really bad. Soon this time we had 2 newbies to the group Ceri-lee and Suzanne came to join me, Dave, Bruce and Si.

As we were driving over from Kendal kept thinking that we might be lucky and the rain would improve, how wrong were we. The weather was not so bad when we set off, decided to do just the High Stile range leaving Haystacks and Fleetwith Pike for another day and I’m so glad we did.
Having secured our free parking and getting togged up in our waterproofs set off on our walk. It was Suzanne’s first hill walk and she is made of stern stuff as she said it didn’t put her off!
The climb up Sourmilk gill was quite steep but was sheltered so we were lulled into a false sense of security of what was to come! After we had passed the saddle there was a stone shelter before we headed up Red Pike. The weather had come down, the rain was horizontal and hail thrown in too. We were huddled in the circle trying to put more layers on! My t-shirt was soaked and Dave said I was better taking it off and wearing my fleece next to my skin to be warmer, so I had to be brave and strip off in front of the boys! I didn’t care as long as I was warm, Bruce did say maybe boobs and brownies would increase future numbers!

My sense of direction is terrible and when I asked Bruce how far we had to go as we were doing a shorter walk, thought we would be back at the car within an hour or so, his reply was prob another 4 hours. My face dropped and he said later my face looked as if he’d shot my puppy as I looked that heartbroken.
We plodded on through biting winds and hail over Red Pike and to Standing Stones. It was here I said I really needed something to eat and produced some canapés I had made. It was just the lift we needed, usually there is a sheltered place to have our bait but everywhere was so exposed we just carried on. Fuelled by my goodies we went onto the Seat and then saw Haystacks peeking though the clag, we then went down Scarth Gap pass, Warnscale down to Peggy’s Bridge and back along the shores of Buttermere and the welcome sight of the car.
I have never in all the years of walking, walked in such conditions but as Si said there is something about being in the extremes of the weather that makes it even more fulfilling when you have finished. Some of the paths were like running rivers and I definitely need to invest in some new kit! But in those conditions I don’t think anything would have kept us dry.
We had earnt our pint in the Bridge Hotel and the gorgeous food.
Next walk is 28th October and doing something round Wetherlam 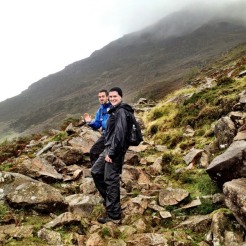