Skip to content
So another twitteratti walk was here and the weather was not looking great. After getting soaked on our Buttermere walk vowed would not go out in bad conditions! But as I’d organised it thought would be bad form not to turn up. Plus had newly purchased waterproof jacket and trousers to put through their paces.

We met at the car park in Tilberthwaite at 9.00, everyone turned up on time despite the clock change.
So there was me, Dave, Gary, Si, Andy, Tanya, Jim, Paul, Sian and newbies Martin and Kirsty (even though we had met Martin on the 3 peaks)
Martin had tweeted me asking if there was a plan B ermm hadn’t though of one so I just thought well let’s see who braves the weather and take it from there. After introducing Martin and Kirsty to everyone we decided let’s just go for it.
The rain was relentless and as we ascended the wind was awful nearly blowing you off your feet at points. Despite the bad weather we still had some views as you can see from the pictures. We quickly got to the top, but was too windy to stay long on the summit so we quickly got off the top and started our descent back to the car.

It was too windy even for brownies. On a previous walk, we had joked about having prosecco which Si had bought this time but we thought we will save that for when it is ever sunny on one of these walks. I had made some canapés to have with it but we had these when we got a bit further down.

Soon the car was in sight and more importantly beer at the Black Bull. After our walkers reward it was time to say our goodbyes and swap brownies for pork pies!

Here’s hoping for better weather on the next one! 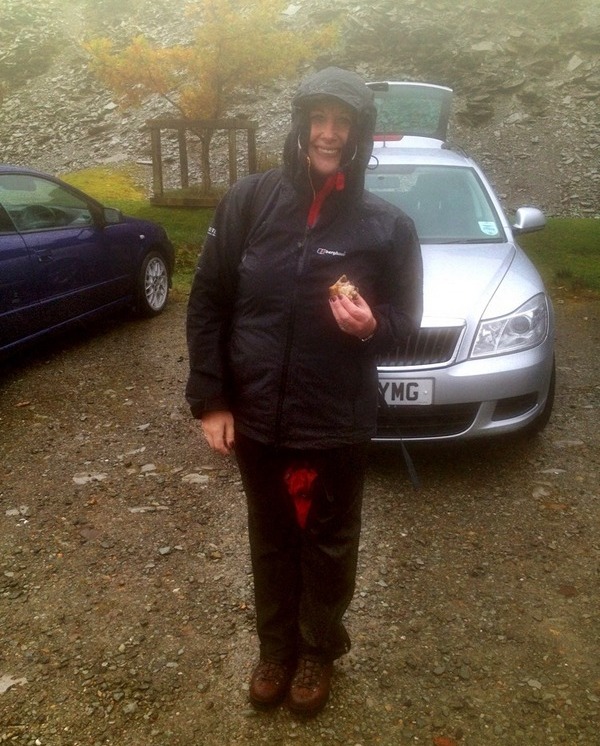 3 thoughts on “A very wet Twitteratti walk up Wetherlam”