“The marathon. Where an average runner becomes more than average.” – New Balance

After tearing my medial ligament 7 weeks ago, thought that my marathon dream was over. So the fact I was on my way to the Excel centre to register for one of the biggest marathons in the world was a major achievement.

I had seen Graham, my physio the day before for my final treatment and get my leg strapped up. He said this is not a stopper, your knee will be fine and just enjoy it. Well as much as one can enjoy a 26.2 mile run. Even though Graham said it’s not 26.2 miles it’s 4 x 10k runs!!

When you enter the Excel centre and get your race number and kit bag it all becomes very real. I was trying to carb load but my tummy was in knots and eating was the last thing on my mind. Last minute check of my kit and a relaxing bath and it was time to try and get some sleep in preparation for the big day.

I was awake early, Wonder woman costume on and time for breakfast. I managed to a bowl of porridge and a piece of toast but tummy was churning with nerves and excitement. Off to the start, I was on the red start at Blackheath. Several toilet visits later and the announcement came to head for your allotted start. A 30 seconds silence for the people of Boston and then the klaxon started for the start of the London Marathon. Knee was feeling great and just prayed it lasted the distance. It took about 12 minutes to get over the starting line and I was off. Those first few yards, I had such a grin on my face that I was actually here and was running. I knew that I wasn’t going to get a PB but I knew for certain even if I crawled over the line I was going to finish. I had set my social hiking off so people could follow my progress.

Being dressed as Wonder Woman, I got lots of cheers, wolf whistles and high fives. The first 5 miles flew by, knee was good, I was running at a good pace. When I got to mile 11, saw Dave and the rest of my family that had come along to support me. First I heard my eldest stepson screaming my name and it was so lovely seeing them all and gave me a real boost.

The next milestone was crossing the Tower bridge, nearly halfway done. The feeling when you are running across the bridge is just amazing but then comes what I think is the hardest bit of the course. When you are at mile 14, mile 21 is on the opposite side. Everything was feeling good but then cramp in my calves started, it was excruciating. I ran through it but between mile 17 and 18 had to stop at the St John’s and get them massaged. It helped but the pain was tough. I just kept going just thinking off the next mile marker, the next water station, anything just to try and not think about the pain in my calves. Ironically my knee was feeling the best it had in weeks!!

Mile 21 was the next meeting point with my family which kept me going and the thought of a Mars bar. But mile 21 came and went and no sighting of my family, I just hit the wall. It is the worse feeling in the world but took another of my gels and soon was at mile 22. Then the realisation that the end was in sight. My tracking had stopped due to my battery going and not using my emergency charger, but as I found out later, Martin had put on Facebook that you could track me on the London marathon site.
By this time I was doing a mixture of running and walking just anything to get to each of the mile markers.

On mile 25 as you go under the tunnel, there was an Adidas stand and it said “Pain is temporary, finishing is everything” very true. Then there she was mile 26, I was so happy to see this but the last 385 yards felt like the longest distance in the world. I was hobbling and a fellow runner said come on wonder woman you’ve got to run now. It was painful but I dug in and we went across the finish line together. Hugging each other and high fiving that we had finished the London marathon. 5:05 a respectable time which under the circumstances I was incredibly proud of. Timing tag taken off and then bling time. I had earnt that! Off to the Anthony Nolan meet and greet stand to be taken to the hotel, hoping that my family were there.

The 5 minute walk seemed an age but then my eldest stepson and his girlfriend spotted me and I just collapsed into their arms sobbing. Then I found Dave, my other stepson Jake and the rest of my family. Cue more crying! I was so pleased to see them. Then to the reception, a mars bar, drink and a massage!
My legs were so tired but was so elated that I’d finished against all odds.
A quick family photo shoot in Trafalgar square and we all headed back to my brother in laws house in Muswell Hill via the pub for my celebratory drink!!

I recharged my phone and was completely blown away by the amount of text messages, tweets and facebook messages of support and congratulations. More tears. Up to now, I have raised over £3500 for Anthony Nolan, this means that 35 people can be processed to go onto the bone marrow register.
If you would like to donate please visit www.justgiving.com/Gina-Pennington

So body is still in shock after what I have put it through and legs are very stiff but knee is feeling ok. My injury couldn’t have come at a worse time in my training plan but I got through and gives me building blocks for my next challenge which is the Keswick to Barrow walk. This is number 19 on my list. Manchester 10k at the end of May then training will start for the Chester Marathon in October.
The London marathon is addictive and going to enter for 2014 when the ballot opens. 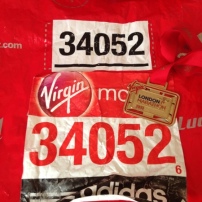 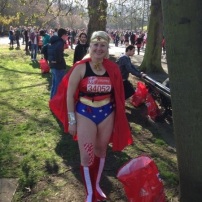 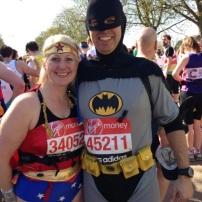