So the last walk of 2013, with a favourable forecast headed off to the hills. With hill fitness not at it’s best, we revised our arranged route to do Hartsop Dodd, Little Hart Crag, Red Screes and Middle Dodd.

Stuart and Gary came to join us and we met at the free car park next to Brothers Water. Paying for parking is against our religion!! Stuart had brought along his gorgeous dogs Sam and Teah.

When we arrived there was a little drizzle and a hint of cloud, I make no apologies for being a fair weather walker. But boots on and as if ordered the rain stopped and the cloud lifted.

The first and last hill loomed as we walked along Brothers Water.

It was a steep ascent to the summit of Hartsop Dodd. We joked it was like a mini Kirkfell! Lots of view stops and soon we were on the top. We were treated to spectacular views down the valley.

From here was a small descent and ascent before the next summit of Little Hart Crag. This was my 120th Wainwright. 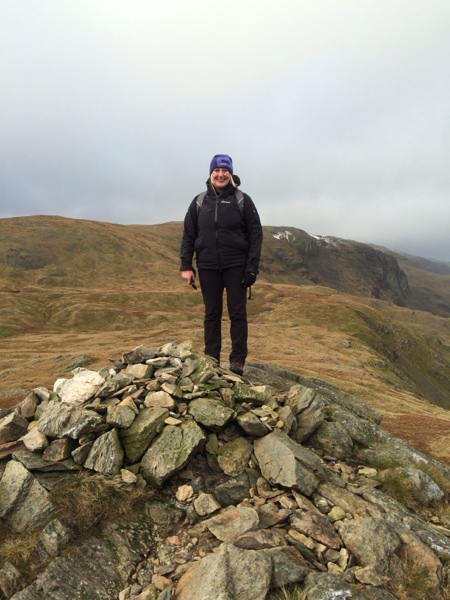 I was starting to feel hungry angry. We decided that there is nothing worse than started a climb with a full stomach. So we climbed a good way up to our next summit of Red screes and stopped for food.

Of course it was treat time. Gary had a tough decision, healthy bar or homemade treats!!

From here was onto the summit of Red Screes. A faint dusting of snow, towards Windermere the view was obscured by cloud. But where we were heading was clear. It had been 18 years since I had been on this summit.

A gentle descent and ascent to our last wainwright of the day Middle Dodd.

Now for a tricky descent, we came off the front and was 45° descent. Thank god I had my poles as would’ve been even more challenging!
The views were spectacular as we descended the hill.

Even more so when the path abruptly ended at a top of a small crag. So we picked our way across the field to the stream and luckily there was a bridge!
Looking back up, we could see how lucky we had been with the weather.
A pleasant walk back on the same path we started on earlier that day. Soon the car was in sight.

Walkers reward was at the Brothers Water Inn. A pint of Barngates Brathay gold was perfect rehydration. We did however get stares as we were laughing and reliving our days walk. It’s a walkers pub, some people need to lighten up.
http://www.shareyouradventure.com/map/45351/CumbrianBlondie/29th-December-2013
http://audioboo.fm/boos/1822501