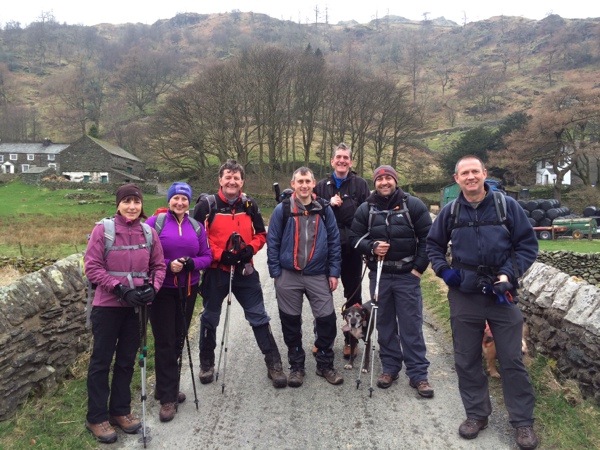 So an impromptu walk with friends in the Far eastern fells. It had been a few weeks since my last fell fix.
So it was a bit closer to home, decided to do a horseshoe walk from Sadgill in the Longsleddale valley taking in 5 Wainwrights.
So the 8 of us and dogs Holly aka the beast and lassie (me, Dave, Karen, Ray, Stu, Dave B, Jim and Shaun) met at the head of the valley. The weather was not looking kind and the cloud was down. Karen and I were hopeful that the weather would lift as the day went on.
Off we set, it was a steady climb. No views but at least we had our banter to lift our spirits.
We couldn’t see a thing and completely went against my “fair weather” hiking rules.
First summit was Shipmans knotts, though the actual summit was difficult to distinguish with visibility being so bad. 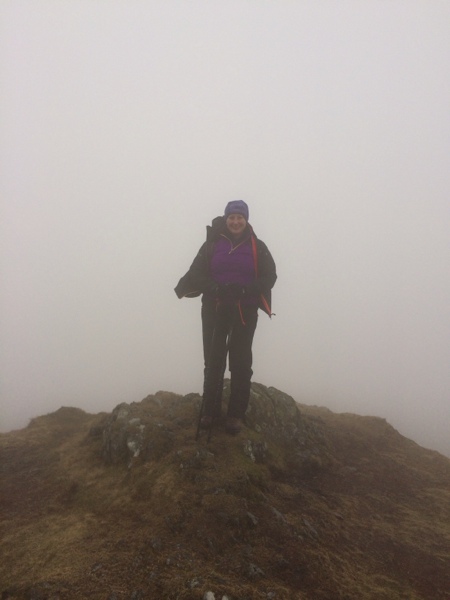 Ray was reciting poetry but whilst doing it, he slipped and ended on his bum at my feet. Though thankfully he wasn’t injured! 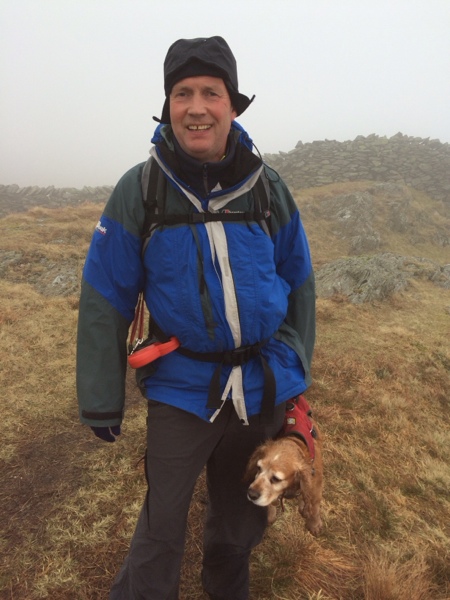 Was a steady climb onto Kentmere pike, the cloud still down and was frustrated to not be able to see anything. Did climb over the wall to touch the trig point. 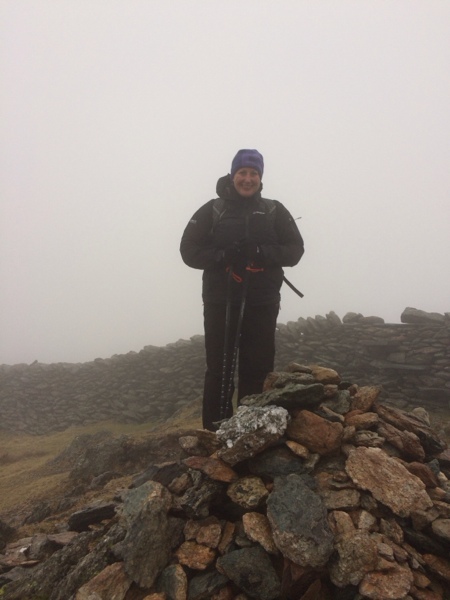 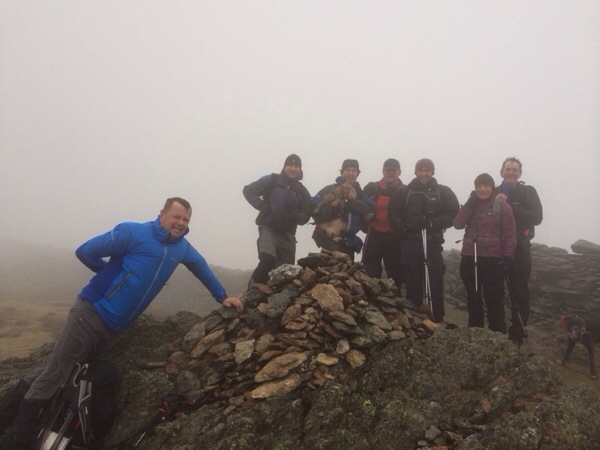 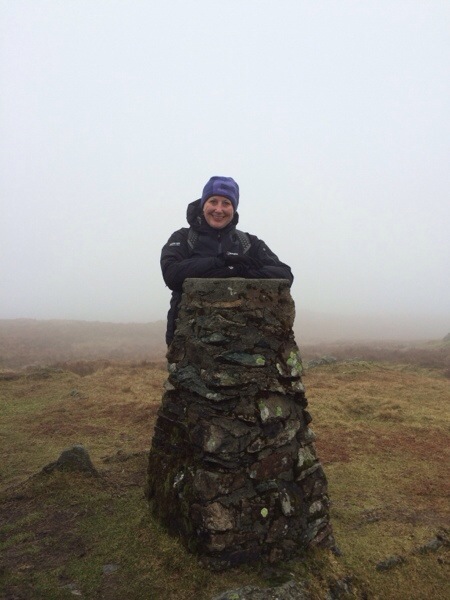 From here another boggy slog to Harter Fell. It has a very unusual summit cairn. A odd mix of stone and twisted iron fence posts. From here, we should’ve had a lovely view down to Haweswater. Unfortunately this was not the case today. Harter fell was Stu’s 150th Wainwright and my 130th! 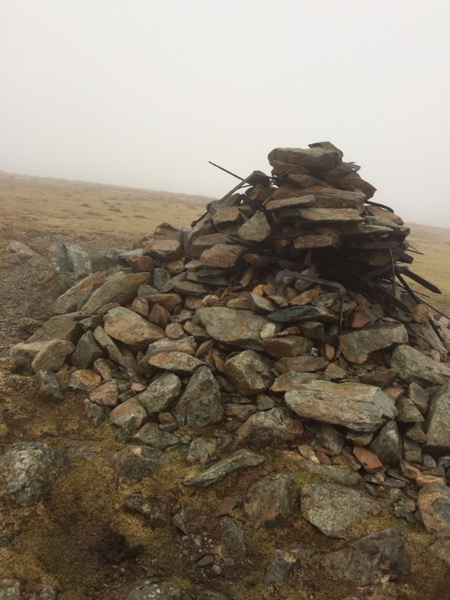 As we left Harter Fell, our prayers were answered and the cloud lifted treating us to a view of Haweswater. 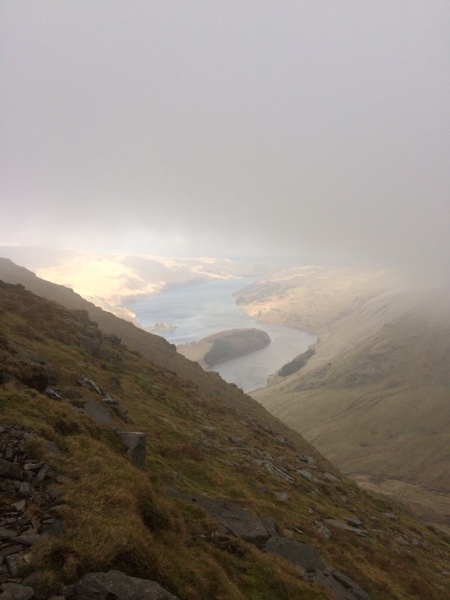 As the wind had dropped decided as we had a view, would be a perfect lunch stop. 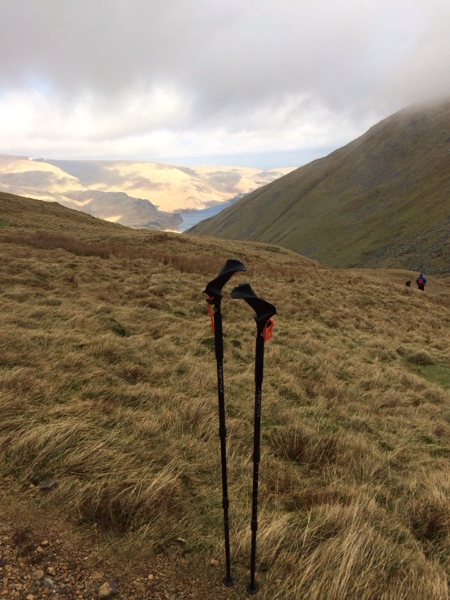 Sandwiches eaten and scraps given to the eagerly waiting dogs. Oh and not forgetting brownies. Making my rucksack much lighter! We were off buoyed by the clouds finally lifting. We had planned to do Branstree and Selside pike but decided to do these another day.
It was hard walking through the grass and bog. Onwards to Tarn crag, there is a large survey post which to the untrained bagger you would think it is the top. But the summit cairn is 100 yday away. A little bit of photo bombing selfie 😉 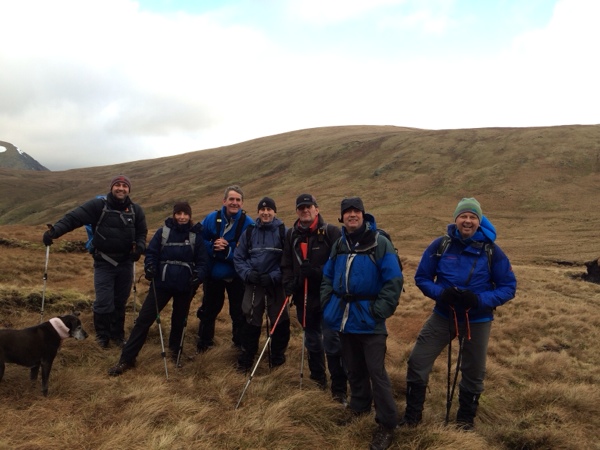 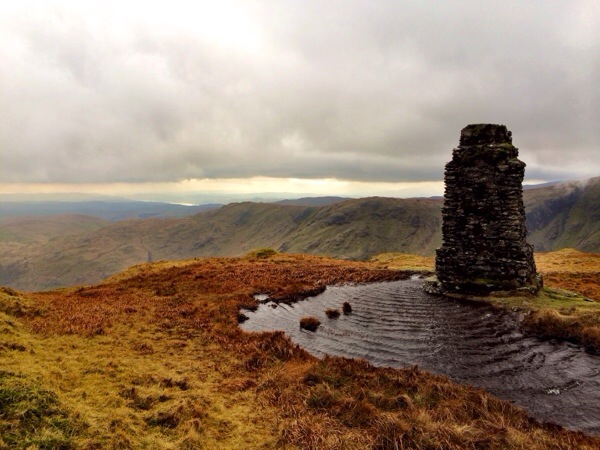 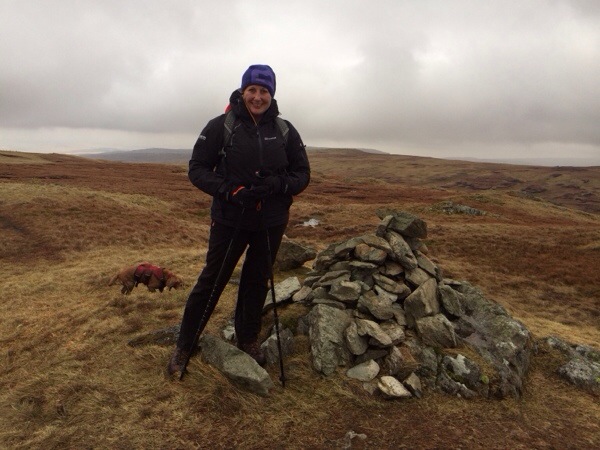 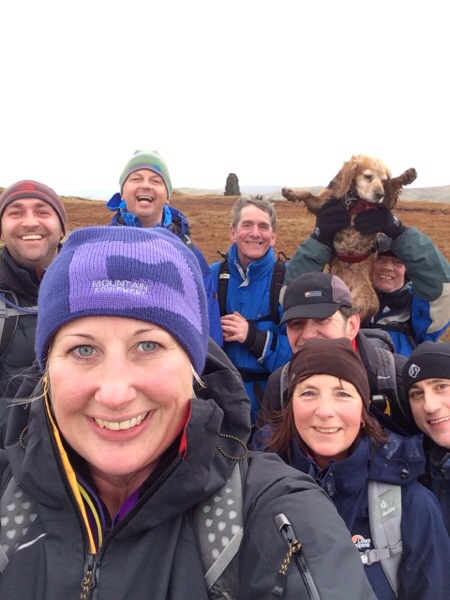 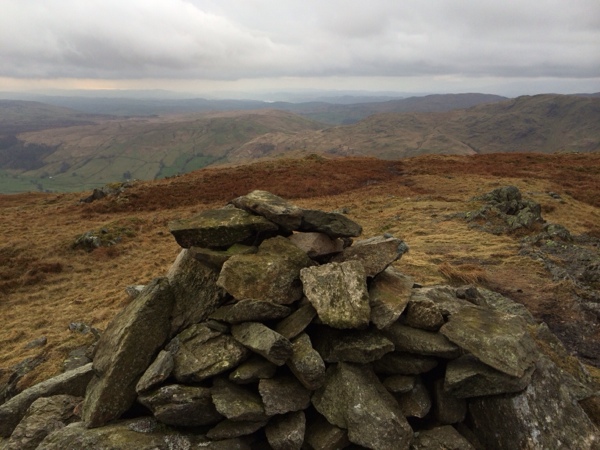 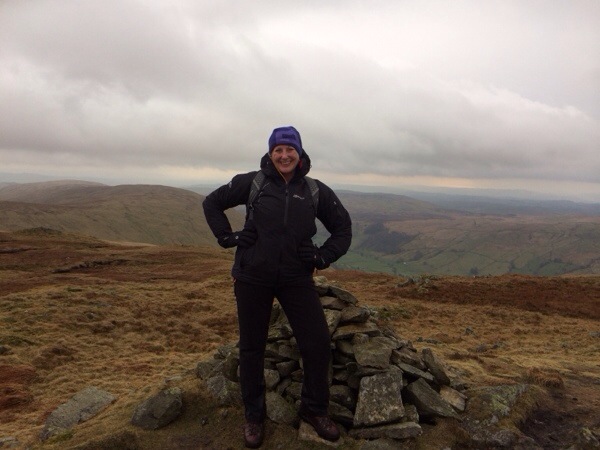 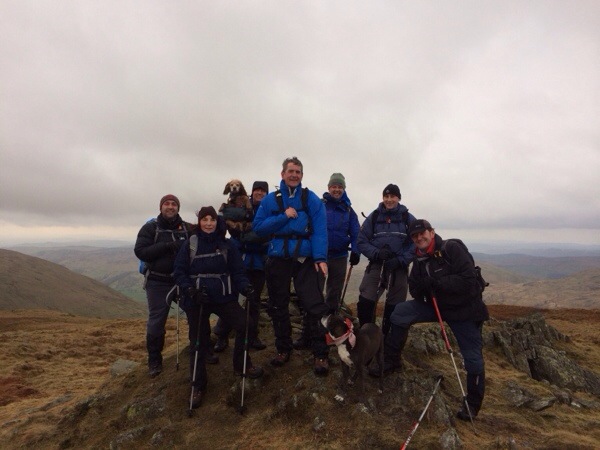 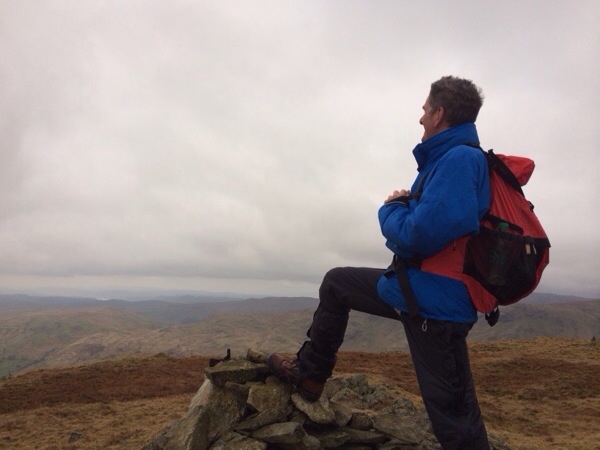 We were thankful that for the descent we had a view to keep us company. 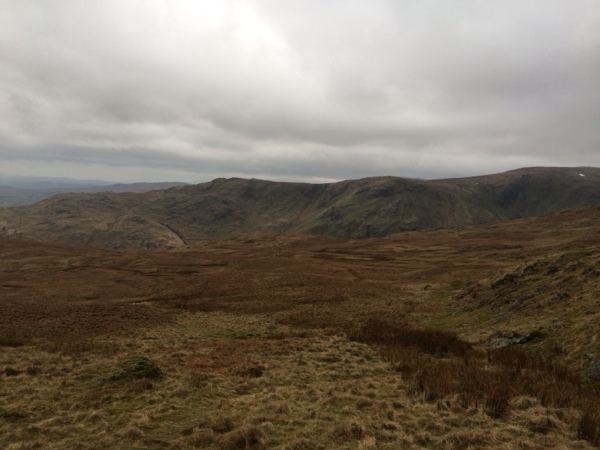 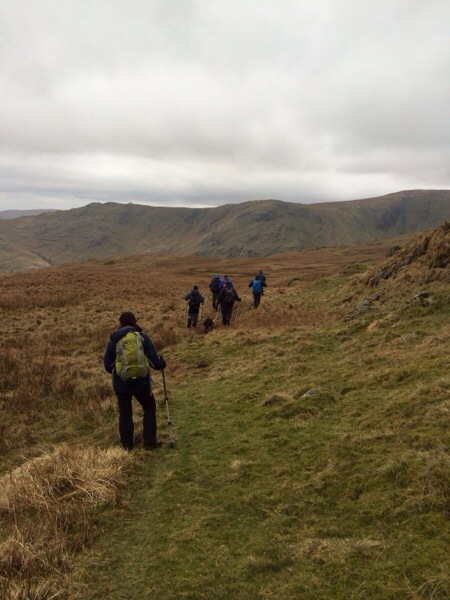 We had a brew stop and was nice to have a break as was tiring bog trotting.
So the last of the brownies were scoffed, creme eggs dished out by Shaun and a cheeky swig of Talisker from Dave’s hip flask. This re fueled us for the final descent back to the car. 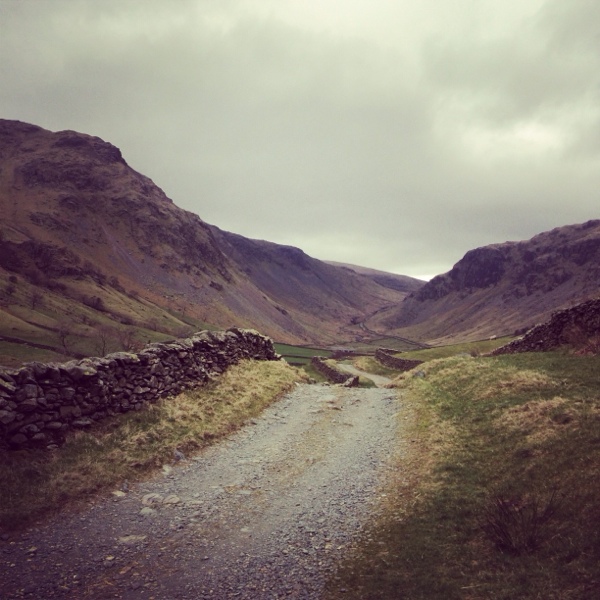 Soon the car was in sight and another 5 ticked off on our 10 mile horseshoe walk.
Good banter but unfortunately no walkers reward 😦 will have to have double on the next one!