A few weeks previously, my friend Dave messaged me and said keep the weekend of the 16th free as its my 60th birthday and would really like to be on top of a mountain to celebrate. I suggested High Crag, Haystacks and Fleetwith as I still had these to do. All we needed was the weather!!
A round robin message and 8 of us gathered to celebrate Dave’s birthday. It was a stunning day too. 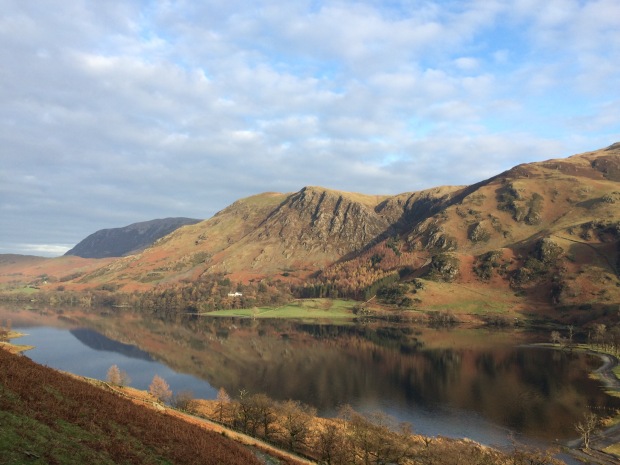 We all met in the Gatesgarth carpark and though against our religion paid the £4 all day parking. Which by Lake District standards is cheap. Such a beautiful day was unfolding before us.
The first hill was High Crag, a gentle ascent and then we took a Ray short cut up the screes. This made sense as otherwise you’d have to walk all the way round to walk back on yourself. 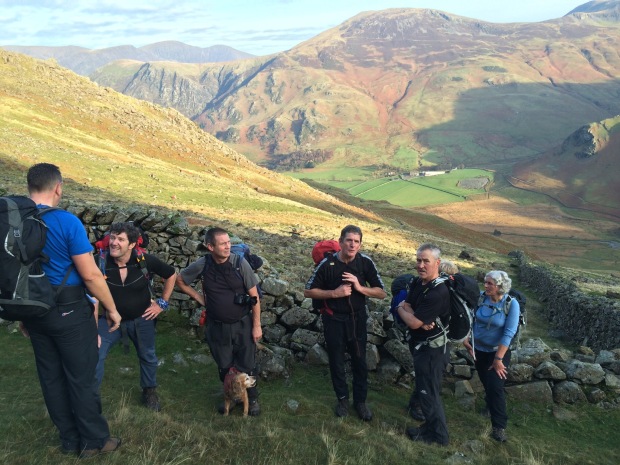 As I walked up I was feeling v unfit as was the rest of the group. Soon the first summit was in sight. The first bottle of Prosecco was opened to toast Dave’s 60th birthday.

High Crag had such amazing 360° to the surrounding hills and down to Ennerdale. It was my 207th wainwright. 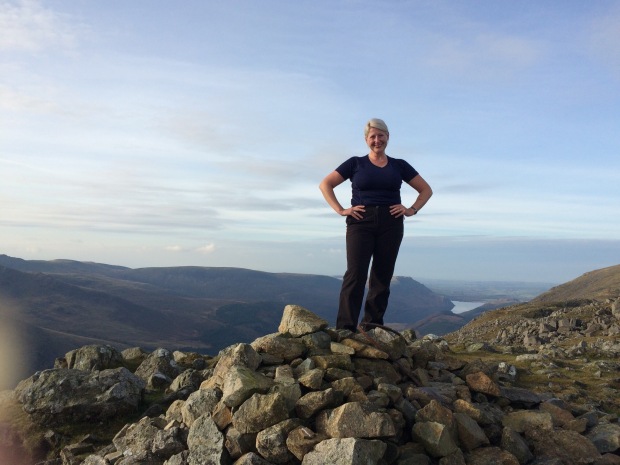 After Prosecco and birthday cake it was time to head off to our next hill Haystacks.
I couldn’t believe that I had never walked these hills before. Such beautiful hills and not too taxing underfoot. 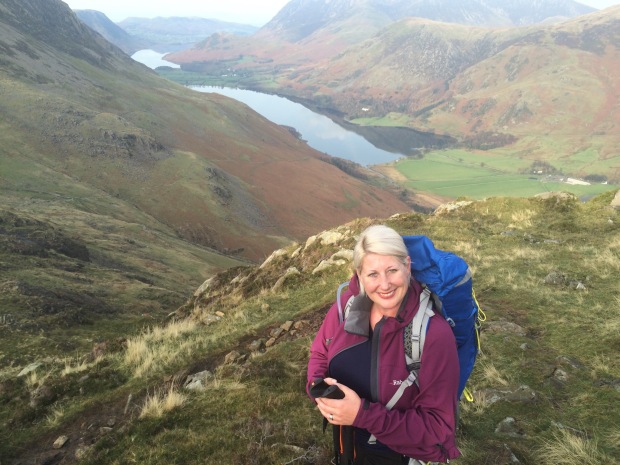 I finally got to see Innominate Tarn the final resting place for Alfred Wainwright. I can see why as it is a stunning place. Haystacks is definitely in my top 10 hills in the lakes. Though there were a group of 3 men who were summit hogging. I had to squeeze on to take my summit pic and when I politely asked if they could move just ignored me. That for me is not nice hill walking etiquette!!

Off the summit was a perfect place to have lunch. Then it was off to the final summit of Fleetwith Pike.

It was fairly easy walk off Haystacks onto Fleetwith Pike. Usually when we are out walking we are on a mission but today was more relaxed. Though we didn’t break any records with how quickly we walked it was lovely taking our time and really enjoying it.
Fleetwith Pike my 209th Wainwright and what a stunner is is. 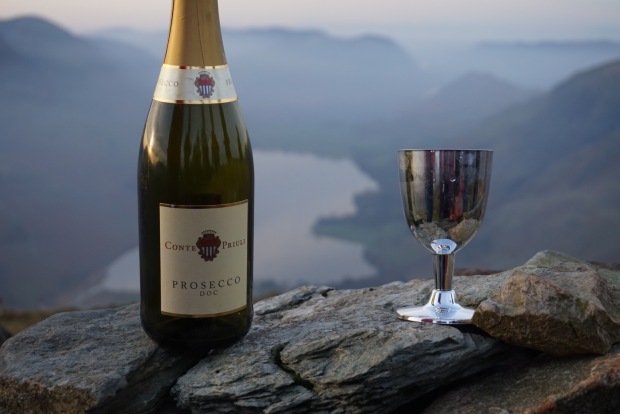 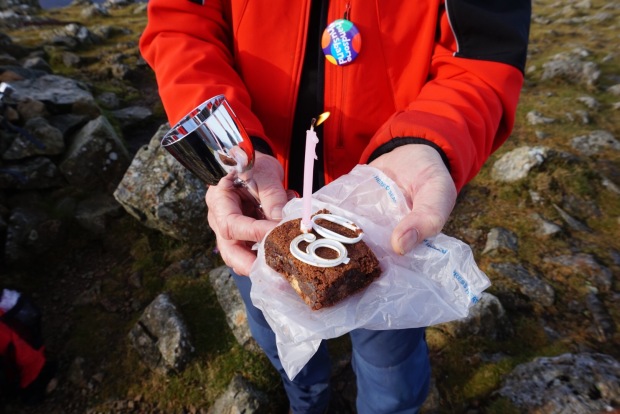 I felt very touched when Dave said he’d really enjoyed his day and had one of his best birthdays. Now for the descent and the sky was turning a gorgeous colour to assist us down. 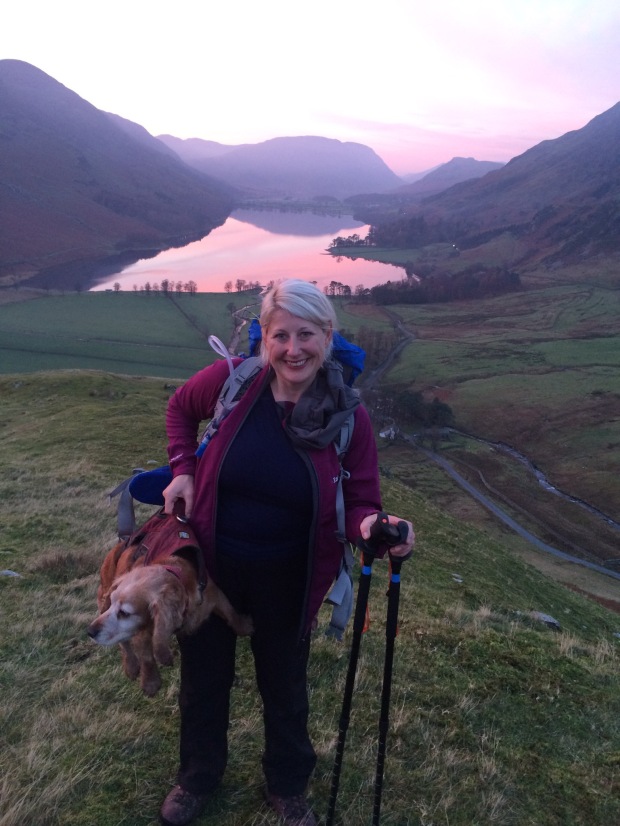 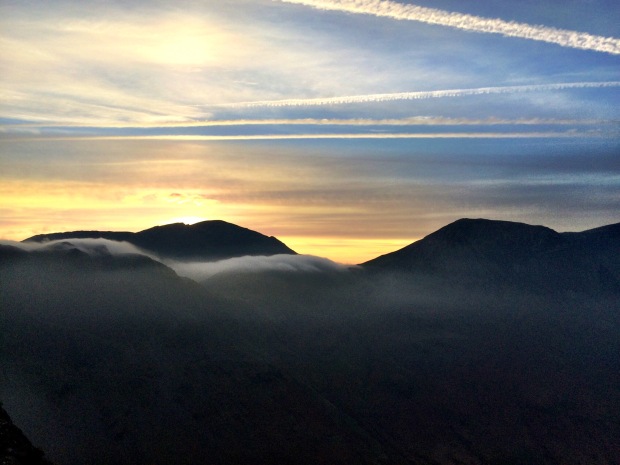 As with all walks the walkers reward is sacrosanct!! Pub of choice was the Bridge Hotel in Buttermere.

Another great day in the hills, 3 more ticked off. Only 5 more to go. I had some negative comments regarding my Wainwright posts. Yes I do know the hills were here before the Wainwright phenomenon took its hold on people like me. Little known fact the hills have been here since the Ordovician age which was 45 million years ago, AW was a mere twinkle at that time.
I’ve been walking in the Lakeland hills for 20 plus years before I even knew about Wainwright and the list of hills. For me it has taken me to places I wouldn’t have normally have gone to and discovered lots of favourites. Also discovered ones I’ll never visit again *whispers Amboth, Lank Rigg, Mungrisedale common amongst them!