Those of you who read my blogs, see that I’m an adventure girl and some of the tasks on my 40 at 40 list are testament to that. I had a meeting at the Kendal wall and noticed they had recently installed an indoor Via Ferrata. Ang showed me it after our meeting and said the following Sunday they were having an open day. It looked interesting so said we would come down and have a go.

Having done Go Ape and the Honister Via Feratta I was familiar with the concept. There were 7 of us doing it. A safety meeting, harnesses distributed and we were ready. I was impressed with the new clipping on equipment. You would always have one clip attached even if you tried not to, as with a newly designed safety feature it wouldn’t let you have both off at the same time.

A few practices attaching the clips onto the practice line, we were off. 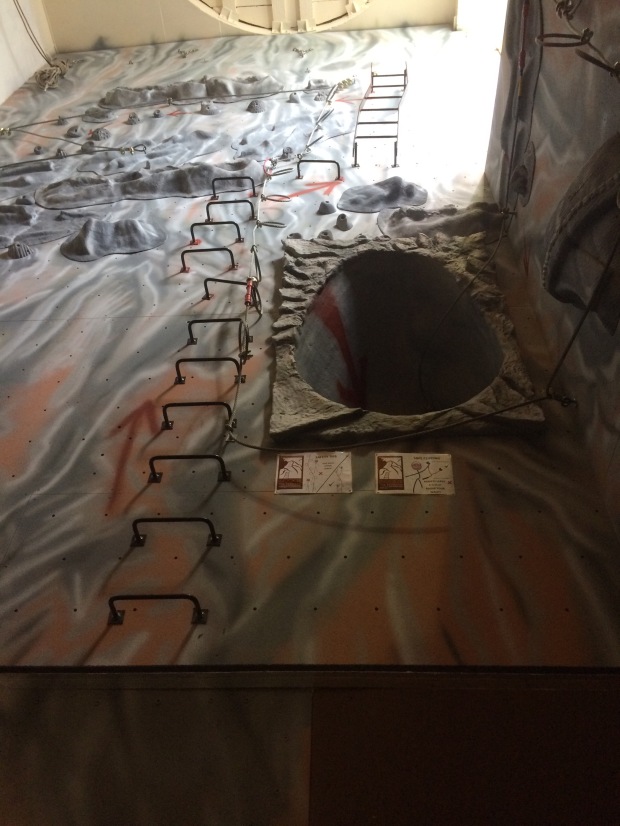 The first bit was fine climbing up the ladders getting used to moving and clipping the clips on and off. All was going ok until one of the group got vertigo and had to come back down. I realise why as I felt the same when I got there too. Luckily Dave and I were last to set off so Steph our instructor came up to guide me across. I was feeling a little more confident. The course zig zagged around the wall and then there is the fun bit of the zip wire! 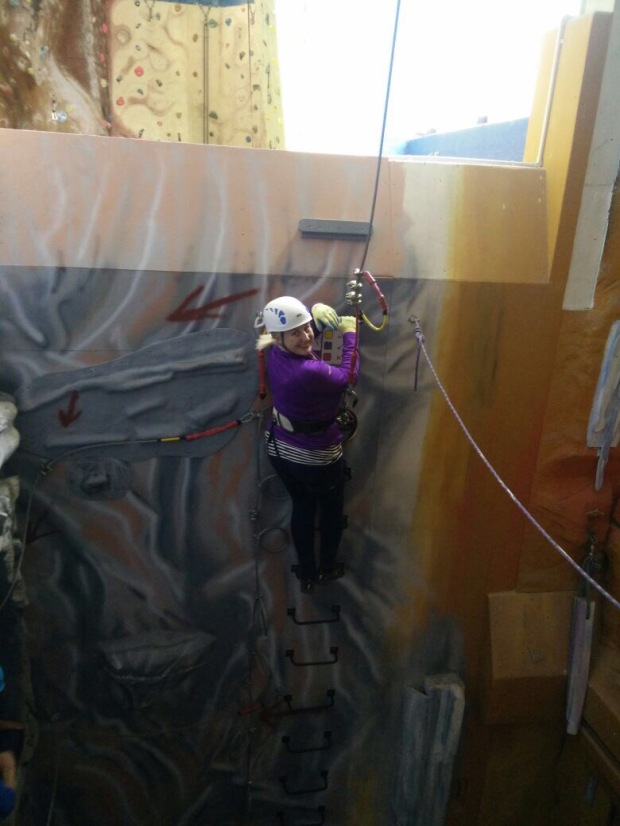 Ok ready to tackle the next bit. 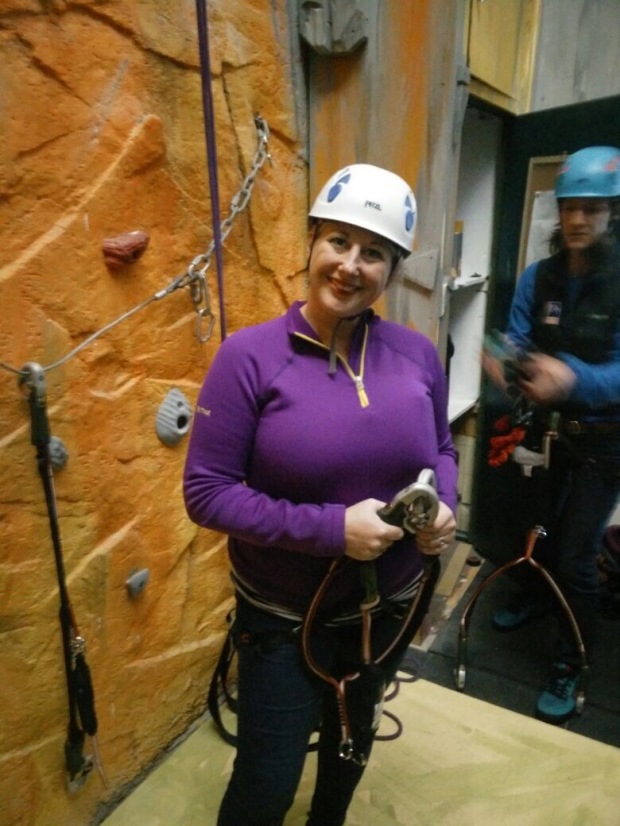 Steph went ahead through the cave section. Once I was in it was very restrictive as you can imagine a cave would be. I started to panic and couldn’t get through. But Steph was there on hand again talking me through and sent a rope down to help me out. Dave was behind me encouraging me to stay calm. The relief when I could quite literally see the light at the end of the tunnel was immense. 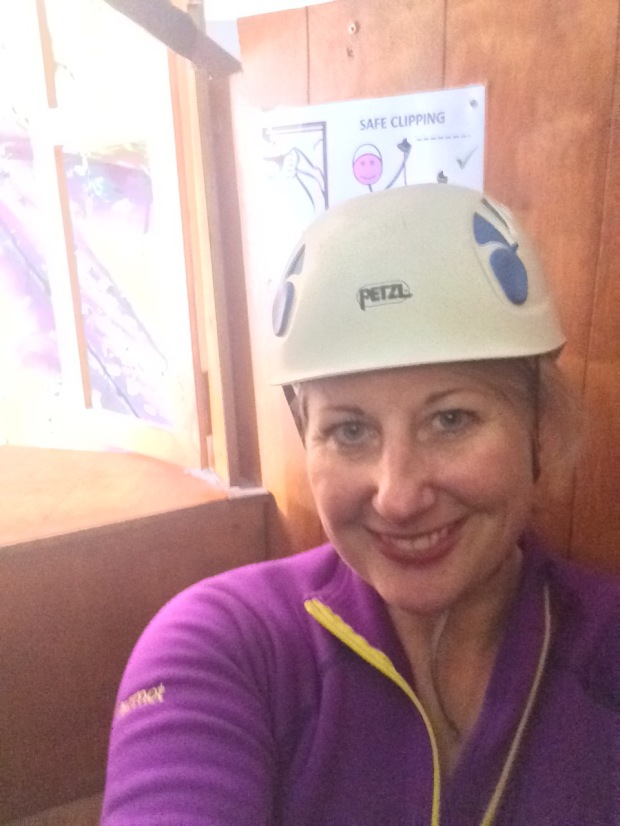 The next section, you had the crawl out of a window and find yourself at the top of the climbing wall! Which is a long way up! A few more ladders across the wall and it was onto a pendulum swing. Having to throw yourself off and then run back and forth across the wall to build up momentum to get across. By this time we had caught up the rest of the group and we’re waiting on a platform to do the final bit. 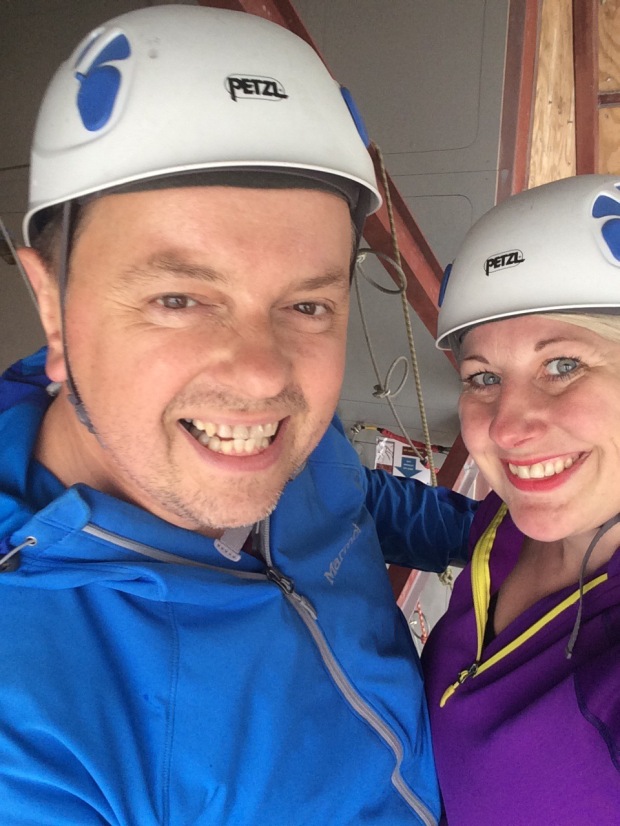 Just a small matter of a 20m drop with 6m of freefall to do before I could say I’d completed the course. My turn to go and I said I can’t do it. My fight or flight panic set in. It’s not natural to step off into the unknown. Steph said ” you done everything else, you wouldn’t be standing here if you hadn’t” so buoyed up with her encouragement I stepped off the platform. Oh my god what a rush of adranellin. I landed very un glamorously and was picked up by 2 guys who had done the skyline with us. They were experienced climbers and said they found it challenging too, so I didn’t feel so pathetic for my panics!

http://youtu.be/qJFKZROKPVc
http://youtu.be/YUoXWw3EHf8
A massive thank you to Steph, she was so patient and calming and I couldn’t have completed it without her gentle encouragement. The Skyline is a brilliant addition to the climbing wall. If you get chance give it a go.

Always a good thing to do something that’s a challenge and scares you just a little bit. You don’t have to be a climber, just able and a sense of adventure. Thank you Steph! 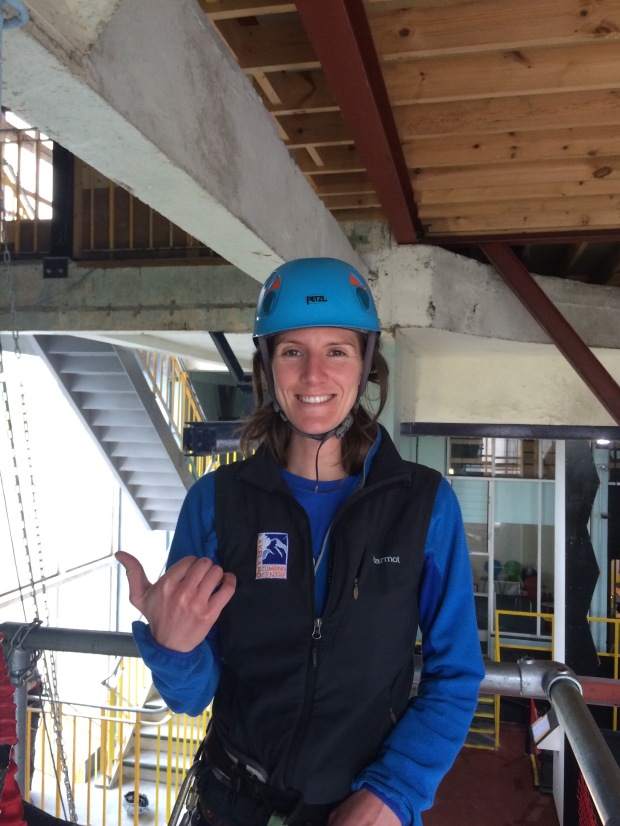