When I mentioned on social media I was wanting another tattoo, it was greeted by a “why would you want to do that” because I want to, I like them, actually that’s not true I Love them.  I remember being transfixed seeing tattoos for the first time, usually on older people and wondering what it was.  Of course, there are plenty of reasons to dislike tattoos – like any piece of art, not every style will be to everyone’s taste. To some, the permanence will never appeal. Or perhaps there’s nothing as beautiful to their eyes as unmarked flesh.

Tattoos have been around for centuries, tattoos have been discovered on Egyptian mummies.  The first professional tattooist in Britain was established in the port of Liverpool in the 1870s. In Britain at that time tattooing was still largely associated with sailors, the lower or even criminal classes.  Then it became fashionable among some members of the upper classes, including royalty, in its upmarket form it could be an expensive and sometimes painful process. .

This trend lasted until the beginning of WWI. The invention of the electric tattoo machine caused popularity of tattoos amongst the wealthy to drop off. The machine made the tattooing procedure both much easier and cheaper, eliminating the status symbol tattoos previously held, as they were now affordable for all social classes. The status symbol of a tattoo shifted from a representation of wealth, to a mark typically seen on rebels and criminals. That must make me a rebel?  Apparently according to some, these marks are a waste of money and they’re just going to fade, blur and sag. And??

I had my first one back in 1998, always wanted one and had a henna one before taking the plunge. It was a Chinese symbol which means ‘Happiness’ not egg fired rice as I’ve been told on numerous occasions!! For me my tattoos symbolize times in my life or that I just liked it.  The pain is a weirdly enjoyable feeling. Obviously it hurts, especially on bones, but it makes you feel as if you’ve gone through something to achieve it. You have to have guts to have a tattoo because it’s a permanent statement.

I have a ‘D’ on my ankle which is my husbands initial, we did joke that if we ever split up I would have to find another man with the same initial.  I had some added to it a couple of years ago.

My other ankle has a tattoo , this was done after the IVF failed. Some might think why do you want a reminder of something so traumatic. When I look at it, reminds me of being in a dark place and that I’m not now. 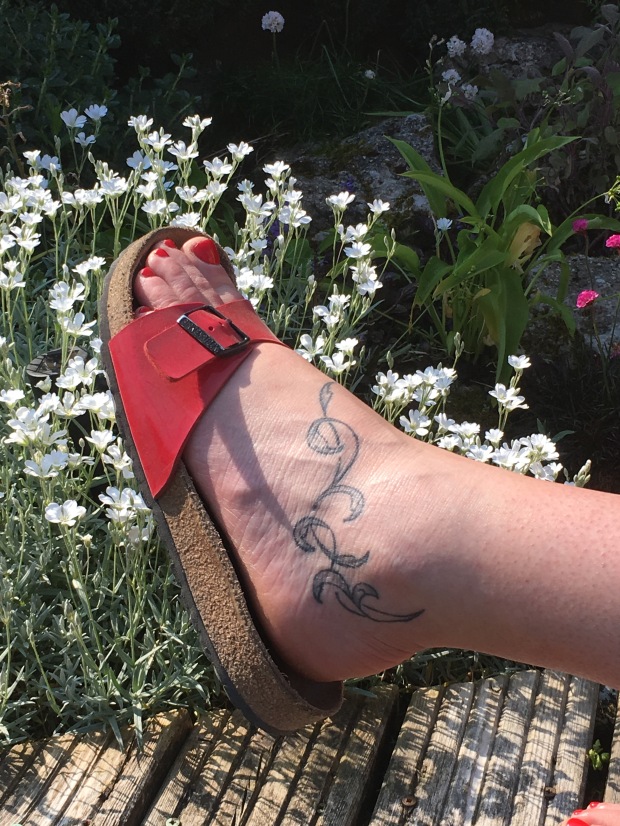 When I was 40 I had a tattoo of a dandelion on my stomach. A popular design associated with this meaning is of the seedlings of the flower transforming into birds. It depicts that not all blows in life take you down; at times, they also give you the opportunity to free yourself from the emotional baggage.  The seedlings when freed from their bond, take the wind’s course and finally become their true self―free birds.  This represented to me a new beginning, the acceptance that my life would be different than I’d planned. The start of acceptance as I started my 40’s. Wendy from LA7 ink did this and I love how delicate it is. She has done another 2 and is a fantastic instinctive artist. 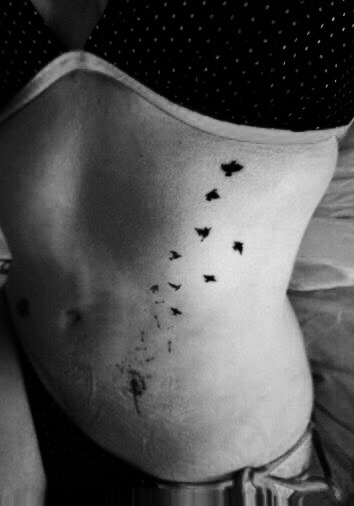 My latest one, is on the bird theme.  I had it done because I loved the design and it matched my existed birds on my other tattoo.  I couldnt’t resist having the Twitter bird as I am a fan. 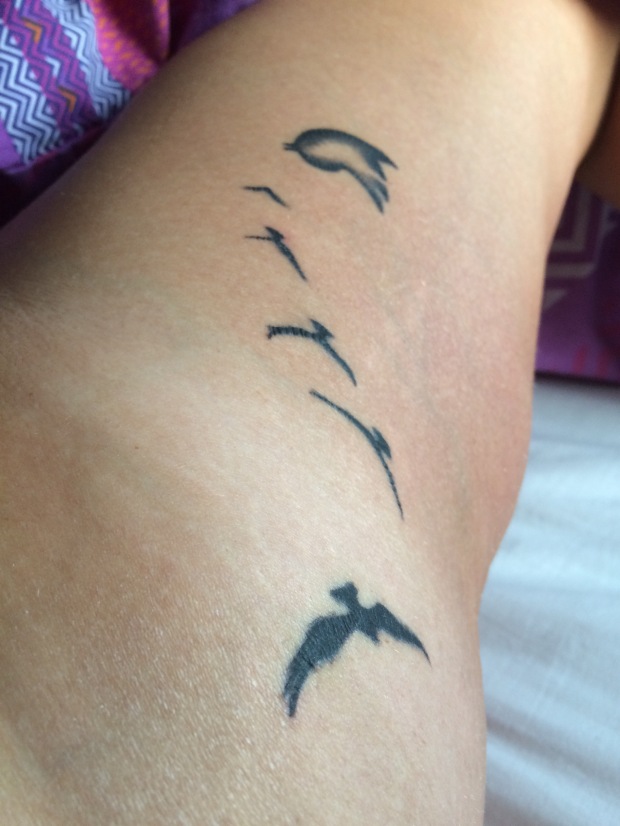 Tattoos are personal to each person and whether you like them or not.  Some things I have heard about women’s tattoos: they are chavvy, common, tasteless. They are a mark of the slut, the slapper, the loose woman. Maybe this is true, but so what? Yes as I age so will my tattoo. Most of mine are undercover 90% of the time, only revealed when in a bikini on my holidays but I’m proud of them.

Some say tattoos are addictive and I would agree, hence why I’m wanting more. Just one more 😉