I’m a huge fan of the slow cook letting the oven do the bulk of the work. Pork is such a delicious meat and relatively inexpensive. This was just as delicious the following day cold. Ingredients

Heat the oven to 200°C/fan180°C/gas 6. Mix the garlic, sage, zest and oil in a bowl. Season. Snip any string from the pork. Lift the flap where the shoulder blade would have been, then spread the marinade all over the meat. Tie up the pork with kitchen string so it keeps its shape. 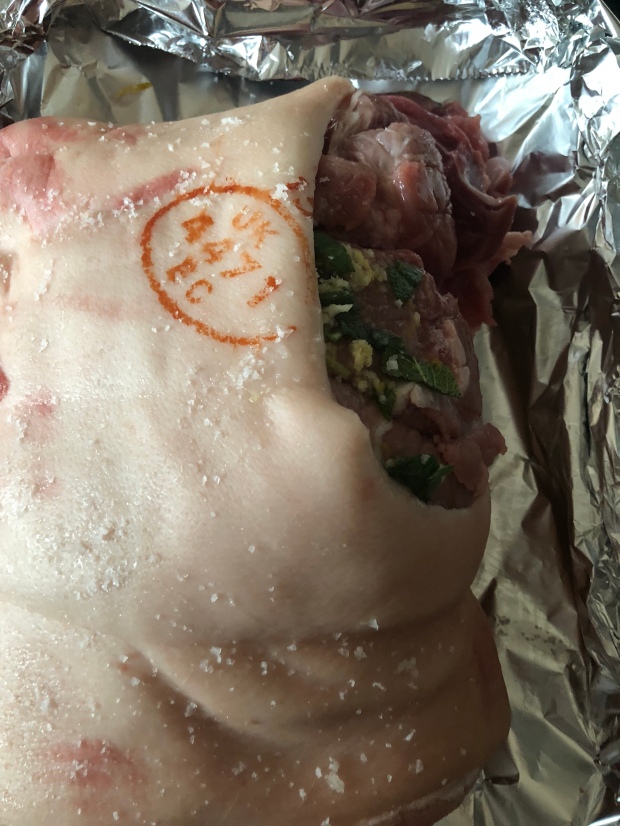 Line a roasting tin with a double layer of foil, then sit the pork on top, skin-side up. Pull the foil up around the pork to form a smaller tray. Pour the wine into the foil tray, to about 3cm up the side of the meat. Pat the skin dry with kitchen paper, then sprinkle over sea salt and rub it into the skin. Roast for 25 minutes.

When ready, remove the pork from the oven and turn the temperature up as high as it will go. Pour the juices from the foil into a jug and set aside. Close the foil up around the meat tightly so only the skin is exposed, then put it in the top of the oven for 20-25 minutes (check it’s not burning) until the skin is crisp, deep golden and slightly bubbled.

Put the meat on a board to rest for 20 minutes. Meanwhile, skim almost all the fat from the reserved juices (freeze or chill it for roasties). Simmer the juices in a pan until reduced by a third. Season to taste. Carve the pork, then pour over the juices to serve.